Solving the puzzle of tiny organisms 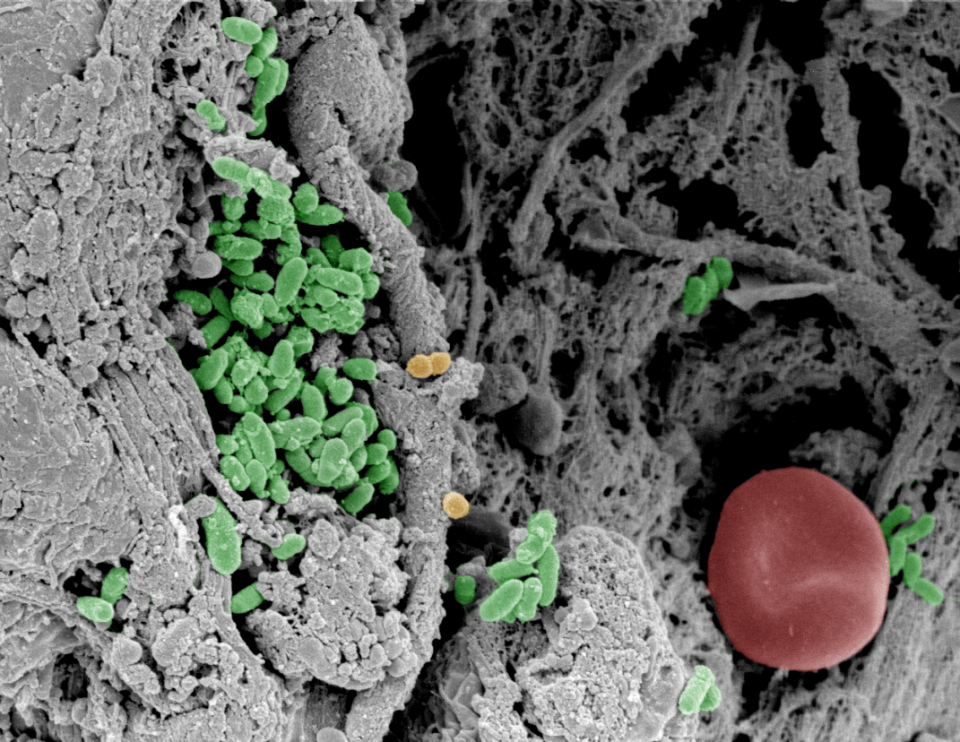 Dutch microbiologist and immunologist, associate professor Mariena van der Plas, has set up a bacteria lab at the LEO Foundation Center for Cutaneous Drug Delivery in Copenhagen. She is an expert in bacteria, which can cause severe infections in wounds.

We all have bacteria on our skin. For healthy people it’s good, but if your immune system is weak, and you have a wound, it can cause big problems.

Pseudomonas aeruginosa is a common bacteria living on our skin. It is often involved in non-healing ulcers on the inside of the leg, just above the ankle, called a venous leg ulcer. It is estimated that around 1 in 50 people over the age of 80 has a venous leg ulcer. Mariena van der Plas is determined to help this large group of patients as old people with non-healing leg ulcers don’t get much attention.

However, when she arrived for the first time at the University in Copenhagen as an assistant professor in the winter of 2017, she was in for a surprise.

Mariena van der Plas was hired to set up biological models for wound and skin infections at the LEO Foundation Center for Cutaneous Drug Delivery, and was eager to get started in her own lab. But she found the lab with no equipment at all. Not even a chair. Therefore, her first task was figuring out, what she needed to furnish a bacteria lab.

With an extra grant of DKK 2.75 million from the LEO Foundation for the project “Development of Biomarkers and Models for Wound Infection”, 150 items from biosafety cabinets, over petri dishes to lab equipment was ordered, and at the beginning of 2019 the laboratory could finally be set up and put into use.

Mariena van der Plas laughs, as she tells the story about, how she got compagnies to reduce the price significantly “just by asking”. Negotiation doesn’t come with the profession. That was a new experience for the scientist, who is more familiar with manipulating bacteria than salesmen, but nevertheless managed to get a good deal.

Mariena was trained as a molecular biologist, a medical biologist and an immunologist at Leiden University in The Netherlands, and has worked as a postdoc at Lund University, Sweden. She is specialized in acute and chronic wound infections, inflammation and subsequent tissue damage, and has 15 years of experience within the field of understanding and targeting wounds and skin diseases.

Now she is diving into the world of pathogens every day with her team, a PhD student and a postdoc, at the bacteria lab.

The PhD student is researching in biomarkers, that can tell, what is going on in the wound.

“There is no good way of diagnosing wounds, and what infections there are, and because of that, it is also difficult to treat. Sometimes these patients are misdiagnosed because the wound looked different from, what was really going on.”

The postdoc is a veterinarian, and she is going to set op all kind of models for studying infections and testing new drugs.

At Lund University Mariena van der Plas has a postdoc looking into host-pathogen interactions. Also, she is working together with the specialists in pharmacy and drug delivery at the Department of Pharmacy.

The bacteria lab is located in the basement of University of Copenhagen, and Mariena van der Plas kindly offers a guided tour in the lab.

The interest began with maggots

On our way down to the bacteria lab, she tells, why she has chosen to work with bacteria.

“I find it fascinating, how these really tiny organisms, which we cannot even see with our eyes, actually are interfering with absolute everything: The way we behave, our health, and in almost any disease, you can think of, there are some bacteria components, that could make it worse.”

Her specialization in the bacteria of wounds began with maggots. While she was doing her masters at Ledien University in Holland, her supervisor got money for a project on maggot therapy in wounds. She joined the project as a PhD student.

She is intrigued by the whole interaction between host and pathogen.

Also, the complexity of infections and wound healing is challenging.

“We see so many differences depending on the type of wounds and depending on other diseases, the patient could have. And it is fascinating, how flexible the bacteria are to change their way of operating and infecting, and on the other hand just how sensitive our whole immune system is to changes, and therefore also gives us many problems dealing with diseases.”

On top of this she is driven by the possibility of helping a large group of patients, which do not get much attention: Old people with non-healing leg ulcers.

Almost everything in the lab is white and blue. There is no smell. In the background: A whistling sound of venting. Mariena van der Plas presents a machine, that can measure the optical density of a sample with bacteria in order to calculate the number of bacteria. Another machine can make the pathogens visible with an advanced imaging system.

Mariena van der Plas stops in front of, what looks like an ordinary refrigerator, and opens the door. Inside are stables of petri dishes on a shelve.

“This is where we have our strains,” she says and grabs one of the dishes.

Holding the dish in her hand, she is looking almost with affection on the bacteria strain inside the dish, which is light orange colored and is shaped like ice crystals on a window.

This is a strain of the bacteria Pseudomonas aeruginosa, a common bacterium living on our skin. Often this bacterium is involved in non-healing ulcers on the inside of the leg, just above the ankle, called a venous leg ulcer. It is the most common type of leg ulcer. The bacteria are present in 50 pct. of all venous leg ulcers and are associated with delayed healing and increased morbidity in immuno-compromised and critically ill patients as well as individuals with cystic fibrosis or burns.

It’s estimated around 1 in 50 people over the age of 80 has one. The increase in prevalence of all non-healing ulcers is between 6 and 9 pct. every year, meaning that in 2027 between 67 and 100 million people will have these wounds.

“We all have this bacterium on our skin. It is everywhere. And for healthy people it is good, because it eliminates fungi. But if your immune system is weak, and you have a wound, it can cause big problems. It is difficult to eradiate, and it is becoming more and more antibiotic resistant. So, it is bad. Personally, I find it fascinating, that something so common can course so big problems.”

To emphasize how bad Pseudomonas is, Mariena van der Plas refers to, what you could call the “Most wanted villains” of pathogens, a WHO catalogue from 2017 with 12 families of bacteria, that pose the greatest threat to human health. The pathogens are divided into three categories: Critical, high and medium risk. Pseudomonas is placed as number two in the group of critical pathogens.

As if it wasn’t bad enough, Pseudomonas also is quite mysterious, as its behavior is contrary to established biological theories and even surprises other researchers.

Whenever Mariena van der Plas is speaking at conferences on her research, she shows a slide with photos of leg wounds. In one photo the wound is red and swollen, in another the area surrounding the wound is normal in color and not swollen at all. However, the wound is green. “Which is worst?” she asks the audience. And they all point at the red and swollen leg, the one with the obvious inflammation. But they are wrong.

“It is really strange. You would expect to see inflammation in an infected wound. But when a wound is infected by Pseudomonas it is green and has a characteristic smell, but often there is no inflammation, as the bacteria suppresses the inflammation. But it probably has more to do with the host than the bacteria. There is something there, that makes the bacteria able to do this,” Mariena van der Plas explains.

Mariena van der Plas is determined to solve this puzzle to help the many people, who suffer from venous leg ulcers.

For now, the scientists work with the strains in the dishes. They have 30 strains from leg ulcers, and 50 from patients with blood infection.

” We need in vivo, but that is very difficult – and expensive. We cannot use rodents, as their wound healing work completely different from humans. So together with a company we are developing a pig model, as pigs are much more like humans.”

Peptides are in focus

Of special interest in the bacteria lab are peptides, which are naturally occurring biological molecules, found in all living organisms. They play a key role in all manner of biological activity, and the use of them in development of new medical drugs is increasing. Peptides consists of different combinations of 20 amino acids. While a molecule with 2-50 amino acids is called a peptide, a molecule with a chain of more than 50 amino acids is called a protein.

The PhD at the lab is looking for peptide patterns in wounds. When proteins are cleaved by a processing enzyme, it is possible to identify the pattern from the cleaving in order so analyze the underlying processes. The goal is to identify peptide profiles as biomarkers, that can tell, what is going on in the wound. An end product could be a chip, which could analyze a drop of fluid from a wound to make the right diagnosis.

Also, the researchers are looking for molecular mechanisms, that can be used for developing new treatment strategies.

“We don’t want something that is only killing bacteria or just altering the immune response. We want something, that is restoring the balance, because the whole wound process is unbalanced. I have been doing a lot of research on host-defense-peptides. They are antimicrobial, but mostly the antimicrobial part is not the main part, as they suppress the immune system at the same time. That is interesting, for normally when you kill bacteria with antibiotics, the bacterial fragments could induce harmful inflammation but, in this case, the inflammation is also suppressed.”

Having placed the dish back in the refrigerator, Mariena van der Plas disinfects her hands. If any bacteria have slipped into her hands, they are dead by now. She is not afraid of being infected in her own bacteria lab, though it is stuffed with bacteria from infected wounds.

“I am a healthy person, and the bacteria in the lab are common,” she says. But outside the lab – that is a different story. She knows the routes of infection and shows more caution than most people. In public toilets, handling money and in her own kitchen as well. It comes with the profession.

To define novel diagnostic and prognostic peptide-based biomarkers for assessment of healing and infection risk in non-healing wounds. The outcomes have the potential to improve diagnostic evaluations of wounds and will enable the development of novel treatment concepts for early prevention of infection, leading to improved healing results for large and significant patient groups. The project will be done in collaboration with researchers at DTU Bioengineering and Lund University.

With a grant of DKK 40 million from the LEO Foundation, the Center for Cutaneous Drug Delivery was established in 2016 at the Department of Pharmacy, UCPH. The center conducts research on, what happens in and on the skin when we apply drugs. Particular focus is on the physical-chemical aspects of the interaction between skin and drugs, which is important to the development of new drugs.

*Top illustration: a false coloured SEM image of fibrin slough, collected from a patient with a venous leg ulcer which was infected with Pseudomonas aeruginosa (in green). Mariena van der Plas.